The fees were authorized in a new law at the center of a $60 million federal bribery probe. 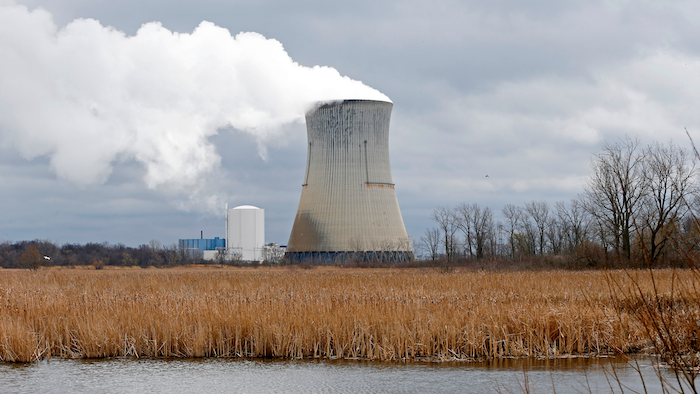 COLUMBUS, Ohio (AP) — Ohio’s attorney general sued Wednesday in an attempt to block the state’s nuclear plants from collecting fees on electricity bills that were authorized in a new law at the center of a $60 million federal bribery probe involving the former speaker of the Ohio House.

Attorney General Dave Yost filed the lawsuit in Franklin County Court in Columbus against Energy Harbor, asking the judge to block payments to the company's two nuclear plants near Cleveland and Toledo that were bailed out through the now-tainted legislation.

The bailout is funded by a fee that will be added to every electricity bill in the state starting Jan. 1 — directing over $150 million a year, through 2026, to the two nuclear plants. This fee is still set to go into effect at the start of the new year if the Legislature does not repeal the law by then.

Energy Harbor is the former FirstEnergy Solutions, a onetime subsidiary of FirstEnergy Corp. The subsidiary filed for Chapter 11 bankruptcy in 2018 amid a mounting load brought on by the rise of competition from natural gas power in the East and Midwest.

Yost had previously promised he would take the legal remedies necessary if the General Assembly could not do so in time.

“Corruption like this doesn’t happen without cash, lots of cash,” he said.

Federal prosecutors in July accused Householder and four others of shepherding energy company money for personal and political use as part of an effort to pass the legislation, then kill any attempt to repeal it at the polls. All five men have pleaded not guilty.

While FirstEnergy Corp. and its executives have denied wrongdoing and have not been criminally charged, federal investigators say the company secretly funneled millions to secure the $1 billion legislative bailout for the two nuclear plants then operated by FirstEnergy Solutions.

The House Select Committee on Energy Policy and Oversight, created by the new Speaker Bob Cupp, has been the scene of rising tensions between Democratic and Republican lawmakers on how best to approach the fate of the legislation.

Some testimony Wednesday called for the straight repeal of the fee law while others warned throwing “the good out with the bad,” will have widespread ramifications on Ohio electricity customers.

Jeff Jacobson, who testified on behalf of Ohio Consumers' Counsel, said the legislation left the burden of the two unprofitable nuclear plants near Cleveland and Toledo on average Ohioans.

While Kevin Murray, executive director of the Industrial Energy Users of Ohio, who had originally testified as a proponent of the bill last year, told the committee that repealing the bill without replacing it with similar subsidies will increase the cost for the state's electricity customers.

Despite not being able to agree on whether the bill saves or costs ratepayers money, nearly every witness concurred the bailout of the nuclear plants is uneconomic and possibly unwarranted.

Cupp and many of his Republican colleagues believe the legislation needs to be carefully untangled in order to anticipate and respond to the unintended consequences of the repeal.

But Democrats want a speedy repeal and say Republicans have been unnecessarily delaying the process.