An upcoming economic meeting with Taiwan is expected to be attended by a senior American official. 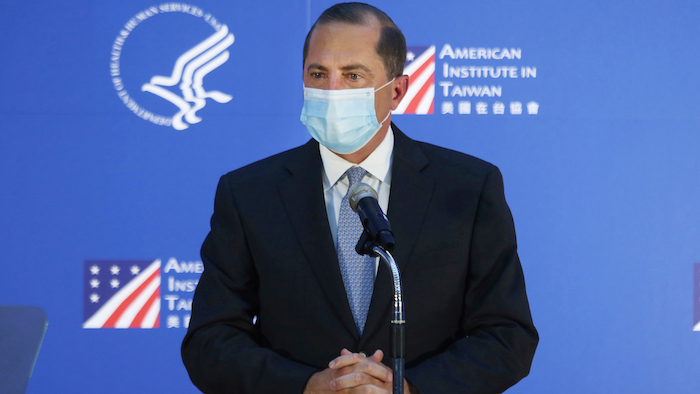 TAIPEI, Taiwan (AP) — China warned the United States on Monday of potential “serious damage” to their relations if it does not withdraw from an upcoming economic meeting with Taiwan that is expected to be attended by a senior American official.

Chinese foreign ministry spokesman Wang Wenbin urged the U.S. at a daily briefing to "stop all forms of official exchanges with Taiwan, so as to avoid serious damage to China-U.S. relations and peace and stability across the Taiwan Strait.”

Taiwanese media reported that U.S. Under Secretary of State for Economic Growth, Energy, and the Environment Keith Krach is planning to visit the island later this week for an economic and commercial dialogue with Taiwan's government.

The visit would follow one by U.S. Health Secretary Alex Azar last month. Azar was the highest-level U.S. Cabinet official to visit since a break in formal ties between the U.S. and Taiwanese government in 1979, when the U.S. accepted a “one-China policy” with Beijing as its government.

A visit by Krach is likely to inspire further anger from China. China considers self-ruled Taiwan part of its own territory, and strongly opposes any official contacts between other nations and the island.

Taiwan's Ministry of Foreign Affairs confirmed last week that it was in negotiations with the U.S. on such talks, but did not comment on a specific date or who might attend from Washington.

Tensions are high between the U.S. and China over issues including trade, cybersecurity, technology and Hong Kong's new national security law. Relations have deteriorated further since the coronavirus outbreak. Trump blames China for the pandemic, and he and his administration have repeatedly accused the country of hiding crucial information about the virus from the global community.