'Hot' Email Pulls Back the Curtain on Big Tech 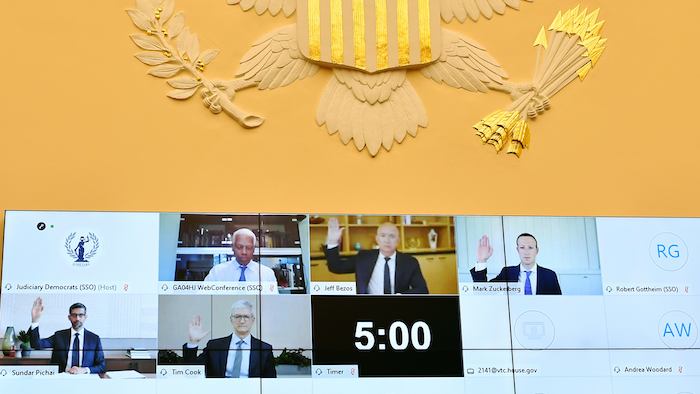 WASHINGTON (AP) — The House Judiciary chairman was closing in on his Perry Mason moment with Facebook CEO Mark Zuckerberg. Fortified with “hot” internal company documents, Rep. Jerrold Nadler was building his case at a hearing that seemed almost like a trial for Facebook and three other tech giants over alleged anti-competitive tactics.

“Thank you, Mr. Zuckerberg, you’re making my point,” Nadler declared. Then to the “jury:”

“By Mr. Zuckerberg’s own admission and by the documents we have from the time, Facebook saw Instagram as a threat that could potentially siphon business away from Facebook and so rather than compete with it, Facebook bought it.”

And then the closing argument: “This is exactly the type of anti-competitive acquisition that the antitrust laws were designed to prevent. This should never have happened in the first place.”

The hearing empowered the Judiciary subcommittee on antitrust, led by Rep. David Cicilline, to publicly air information from more than one million internal documents provided by Facebook, Amazon, Google and Apple during the panel's yearlong investigation of Big Tech’s market dominance.

In doing so, lawmakers provided a rare glimpse inside the likely lines of inquiry being pursued by the Justice Department, the Federal Trade Commission and state attorneys general as they conduct their own antitrust investigations into the tech companies. All are likely to have access to the same document trove.

Lawmakers played back words from the documents during last week's hearing, which marked the first time that Zuckerberg, Jeff Bezos of Amazon, Google’s Sundar Pichai and Apple’s Tim Cook testified (via video) as a group to Congress.

Sprinkled with colorful language from company executives like “digital land grab,” “big video brains” and “kicking butt,” the emails and chat logs, all marked “highly confidential," grabbed attention. Looking ahead, the “hot documents” don’t by themselves guarantee successful legal action by regulators, legal experts say. But they can be very useful.

“It sounds inflammatory but if you really think about it, it’s kind of what you want competitors to be thinking,” says Chad Elder, an antitrust litigation partner in the Bradley law firm’s Nashville office.

Still, he said, such documents can help competitors that are suing a dominant company, and “can make the difference sometimes in whether you get to a jury.”

Hot documents can often be spun either way in antitrust cases. They can be held up by prosecutors or regulators as “smoking gun” evidence of mobster-style tactics to illegally squash competition. But company attorneys may contend they show the sort of vigorous competitive spirit that’s prized in top executives. The companies may accuse prosecutors of pulling a few swaggering emails out of context.

It’s not illegal in itself for a company to be a monopoly. But it can be a violation of antitrust law for a company at the top of the heap to use its power to kick competitors off the hill.

For example, there’s the matter of “predatory pricing.” For a company to set prices below its costs doesn’t violate antitrust law unless it’s part of a strategy to eliminate competitors and then possibly raise its prices over the long term. Below-cost pricing is permissible if it’s done only to maintain or gain market share.

Bezos was questioned at the hearing about Amazon executives’ exchanges regarding competitor Diapers.com, which Amazon bought in November 2010 for $545 million. A June 2010 email from a high-level executive to Bezos and others said: “We have already initiated a more aggressive ‘plan to win’ against Diapers.com.’’

"We need to match pricing on these guys no matter what the cost,” the executive wrote in 2009.

Rep. Mary Gay Scanlon, D-Pa., asked Bezos whether he personally signed off on a plan to raise prices once Amazon had acquired the competitor.

“What I remember is that we matched competitor prices. And I believe we followed Diapers.com,” he said. “What I can tell you is that the idea of using diapers and products like that to attract new customers ... is a very traditional idea.”

The Supreme Court, in rulings in recent years, has to some extent limited the influence of internal hot documents in antitrust cases, pointing instead toward tests of anti-competitive conduct such as prices charged by a company and its competitors.

Internal documents can be useful to investigators for insight into the likely effect of an acquisition or other company action, said George Hay, a law professor and antitrust expert at Cornell University. “They can help in deciding whether there’s a fire there, not just smoke,” said Hay, a former chief antitrust economist at the Justice Department.

That’s of interest because federal regulators are delving into the four huge companies’ acquisitions of hundreds of smaller firms, dating back to 2010. The head of the Federal Trade Commission has said that as a result of the review, the government may require tech giants to unwind earlier takeovers and divest assets if the agency finds violations of antitrust law.

Facebook bought the popular photo-sharing service Instagram for $1 billion in April 2012. Earlier that month, Zuckerberg said in an email: “Instagram can hurt us meaningfully without becoming a huge business.”

In questioning, Nadler tried to pin him down, without getting yes or no answers. Did he mean the threat was that users might switch from Facebook to Instagram?

Zuckerberg eventually acknowledged that Instagram was a competitor in mobile photo-sharing and camera apps. “There were a lot of others at the time,” he added.

Zuckerberg told Facebook’s chief financial officer in a February 2012 message that with possible acquisitions of Instagram, Path or Foursquare, “What we’re really buying is time.”

In a message sent a short while later, he followed up with a clarification: “I didn’t mean to imply that we’d be buying them to prevent them from competing with us in any way.”