But is it merited? 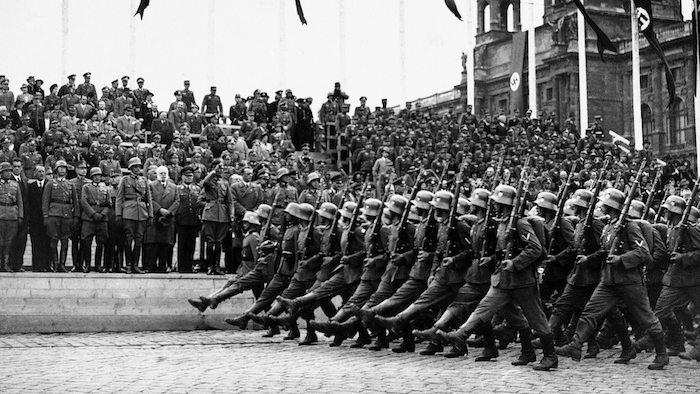 In this March 24, 1938, file photo, German standard bearers parade past Maj. Gen. Fedor von Bock, commander of all armed forces in the Austrian territory, center, on grandstand on the Kingstrasse in front of the Memorial of Honor, as the troops reach Vienna. Beside him wearing overcoat is Dr. Seysz Incuart. World War II references are now heard daily, not because another momentous 75th anniversary, Victory in Europe Day approaches in May but because of the coronavirus.
AP Photo, File

It was the 75th anniversary of D-Day, a week filled with events honoring the sacrifice and blood of tens of thousands of Allied soldiers that was spilled on the French beaches. Leaders from the United States, Britain, Canada, France — and then-foe and now ally Germany — gathered in a rare show of unity in Normandy, where the tide of the war was so decisively turned.

Now, nine months later, World War II references are once again being heard daily — because of the coronavirus.

The comparison is everywhere in recent days: The world is facing the most serious threat and challenge since the last truly global war. Various leaders have cited World War II in their virus-related remarks. There is pervasive fear that an ‘’invisible enemy'' could cause a severe escalation in deaths, ravage the global economy, hamper food supply and spark social unrest.

And there's pushback, too — that the World War II reference is unhelpful and only adds to the fear.

But compare these past frightening few weeks with this roll call of names, places and battles: Hitler, Stalin, Roosevelt and Churchill. Auschwitz and Pearl Harbor and Midway and Stalingrad. The siege of Leningrad, the German blitz of London and the Allied firebombing of Dresden. The final, nuclear chapters of Hiroshima and Nagasaki.

And compare the utter destruction of cities to empty streets now. Or the death tolls: 85 million then, over 18,000 now, though that latter figure is expected to multiply.

Do the World War II comparisons really hold up, or is it just a convenient metaphor? Here's a look at the connections between the two eras — and the fundamental differences as well.

German Chancellor Angela Merkel was born the decade after the Nazis' defeat and grew up in East Germany feeling the war's direct consequences. Last week, in a rare address to her nation, she stared into the camera with this appeal: "Since German unification — no, since the Second World War — there has been no challenge to our nation that has demanded such a degree of common and united action."

U.S. President Donald Trump went from dismissing the virus as a ’’hoax”" to declaring himself a ‘’wartme president’’ as he cited the 70-year-old Defense Production Act to battle shortages in desperately needed medical supplies like masks and ventilators as more and more Americans become stricken. He hasn’t actually used the federal law yet in spite of strong calls from, among others, New York Gov. Andrew Cuomo to do so immediately.

Queen Elizabeth, speaking in recent days, seemed to allude to her own teenage years in World War II when she served as a mechanic and drove military trucks as part of the auxiliary territorial armed services in Britain. “At times such as these, I am reminded that our nation’s history has been forged by people and communities coming together to work as one,” she said.

Italy has suffered more deaths than any other nation from the virus so far. Italian Premier Giuseppe Conte went on TV late Saturday, announcing that he was tightening the country’s lockdown and shutting down all production facilities except those providing essential goods and services. He said: “We are facing the most serious crisis that the country has experienced since World War II.”

In World War II, 3% of the world's population died; of an estimated 2.3 billion people, 85 million perished. With a current global populace of some 7.7 billion, a similar death toll from the pandemic would mean 231 million dead. Some experts have warned of tens of millions dying from the virus if lockdown and social-distancing measures are not adhered to.

But there is no endless bombardment from above across vast swaths of the earth, nor a global human tide of misery fleeing those bombs and massacres, nor concentration camps, nor multiple prisoner of war camps with forced labor.

Entire cities and towns were razed in World War II. Oradour-sur-Glane, France — where the Nazis carried out the worst massacre of civilians on French territory in 1944 — is a ghost town, preserved today in ruin as Nazis left it. More than 600 people, including nearly 250 children, were slaughtered.

Governments are showing varying degrees of commitment to keeping critical industries and the working population afloat in the time of COVID-19. Rescue plans projected by several Western countries bear a resemblance to the Marshall Plan, the $15 billion U.S. initiative that aided European recovery after World War II.

In several countries, as many men fought overseas in World War II, women were called upon to bolster the workforce and, in particular, help to produce armaments. Now the key workers across the world are the doctors, nurses, caregivers and cleaners — and those who can are told to work from home to avoid spreading the virus.

That work and the economies it sustains, like much else in the modern world, is dependent on one key connector: internet service. If that cratered, the next phase of crisis could be one triggered not by developments in technology — such as the atomic bomb — but simply by the sudden lack of it.

For human beings who lived through World War II, such a notion would seem unimaginable.

Genesis X the 'Hottest Concept Car in a Decade'

But the company is so focused on design, that they failed to reveal any technical specs.
Apr 6th, 2021