Authorities say he and his wife paid $50,000 to have a test proctor correct their daughter's ACT exam answers in 2018. 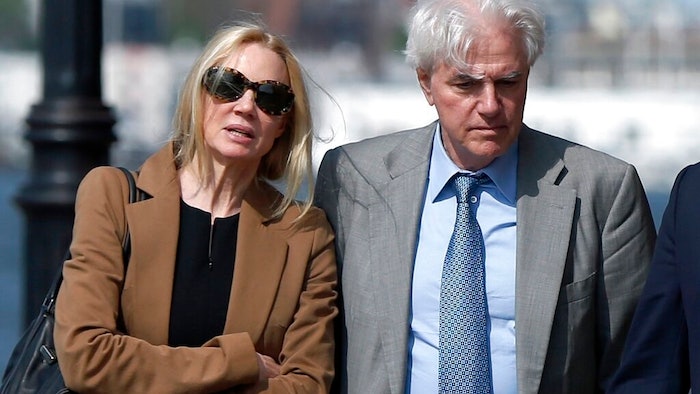 BOSTON (AP) — The founder of a food and beverage packaging company and his wife, a former journalist, are returning to court to be sentenced in a scandal involving dozens of wealthy and sometimes famous parents paying bribes to get their children into top colleges.

Gregory and Marcia Abbott, of New York and Colorado, are scheduled to appear in Boston's federal court Tuesday. They pleaded guilty in May to a single count of fraud and conspiracy.

Authorities say the couple paid $50,000 to have a test proctor correct their daughter's ACT exam answers in 2018, along with $75,000 to rig her SAT subject tests. They kept the scheme hidden from their daughter.

Prosecutors are recommending sentences of eight months in prison and a $40,000 fine for each parent. Lawyers for the couple suggested probation and community service.

In a Sept. 27 letter to the court, Gregory Abbott said that his actions were "wrong and stupid" and that he feels "genuine remorse."

"I share the same sensibilities as most people and, strange as it may sound, identify with the public outrage over my own actions," he wrote.

Meanwhile, the case's lead prosecutor said he plans to recommend longer prison sentences for "Full House" star Lori Loughlin and other parents contesting the charges against them.

Massachusetts U.S. Attorney Andrew Lelling said in a Sunday interview with Boston's WCVB-TV that the longer Loughlin fights the charges, the longer her recommended sentence will be.

"Let's say she goes through to trial: If it's after trial, I think certainly we'd be asking for something substantially higher. If she resolved her case short of trial, something a little lower than that," Lelling said.

Loughlin and her fashion designer husband, Mossimo Giannulli, are accused of paying $500,000 to get their two daughters into the University of Southern California as fake athletes. They have pleaded not guilty.

Lelling added that actress Felicity Huffman's sentence of 14 days in prison was "reasonable." The "Desperate Housewives" star was sentenced Sept. 13 after she admitted to paying $15,000 to rig her daughter's SAT score.

"Huffman was probably the least culpable of the defendants who we've charged in that case," Lelling said. "She took responsibility almost immediately. She was contrite, did not try to minimize her conduct. I think she handled it in a very classy way," Lelling said.