Work requirements for food stamps, known as the Supplemental Nutrition Assistance Program, or SNAP, had been the biggest stumbling block. 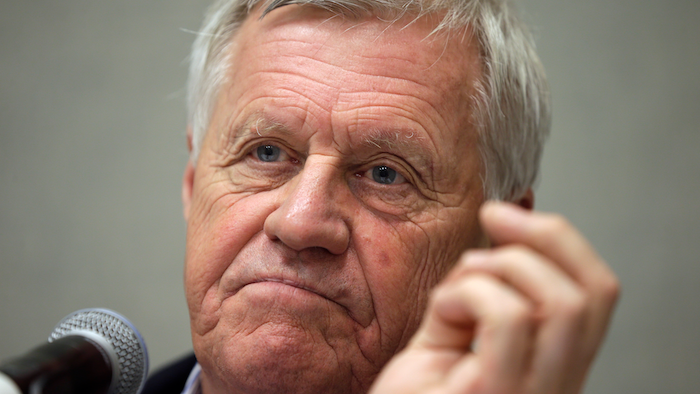 MINNEAPOLIS (AP) — Prospects have improved for Congress to pass a bipartisan farm bill before the end of the year after Democrats secured the House majority during the midterm elections, key lawmakers and other experts said.

Work requirements for food stamps, known as the Supplemental Nutrition Assistance Program, or SNAP, had been the biggest stumbling block holding up an agreement. The version that narrowly passed the House with no Democratic votes includes the tougher rules. The bipartisan version that won easy Senate approval does not, and few Senate Republicans want them.

Observers say it's likely that House Republicans will now be ready to pass a compromise in the upcoming lame duck session rather than starting over in a Democratic-controlled House and risking a result they would like even less. "There isn't any reason why this thing can't get done," said Rep. Collin Peterson, of Minnesota, the ranking Democrat on the House Agriculture Committee and the likely chairman next year. "The only thing I care about between now and the end of the year is getting this farm bill done."

Senate Majority Leader Mitch McConnell said a news conference Friday in Frankfort, Kentucky, that passing a farm bill is one of his top priorities for the lame duck session, too. McConnell, who like Peterson is on the conference committee that's trying to work out a final deal, said compromise on work requirements is needed. "That's the part that is a little tricky, but we'll get there," McConnell said.

Farm bills traditionally set federal agricultural and food policy for five years. While they include safety net programs for farmers, nutrition programs including SNAP are most of the spending. The current law expires at the end of the year. While Peterson might have even more influence on shaping the legislation as chairman, he told The Associated Press that he doesn't want to wait, given how hard farmers have been hit by low prices and trade disputes.

"The farmers need certainty," he said. "They're facing some of the toughest times we've had for a long time. The last thing they need is not knowing what the farm bill is going to be." Republicans would have kept pushing hard for the work requirements if they'd retained control of the House, said Marin Bozic, a professor of applied economics and agricultural policy expert at the University of Minnesota. But the impending Democratic takeover, including Peterson's expected rise to the chairmanship, have changed the dynamics, Bozic said.

Peterson said he spoke this week with Agriculture Secretary Sonny Perdue and the current House Agriculture Committee chairman, Michael Conaway, as well as key senators, and those conversations left him optimistic about getting their remaining differences resolved.

Conaway, a Texas Republican, has said little publicly, and his spokeswoman said he was not available for an interview Thursday. But he put out a statement Wednesday that said: "This week's election results don't change the circumstances in farm country. I remain 100 percent committed to completing the farm bill this year."

President Donald Trump said at a news conference Wednesday that he still wants the stricter work requirements. "Everybody wants it, the farmers want it, but the Democrats are not approving the farm bill with work rules," Trump said. "We could have it very fast without the work rules, but we want the work rules in and the Democrats just don't want to vote for that. So at some point, they'll have to pay maybe a price."

But Peterson said Perdue did not say during their conversation Tuesday night that Trump would veto a version that lacked stricter work requirements. He said SNAP already has work requirements, but many states have been granted waivers, and a compromise could include tightening the waiver rules.

Major farm groups made fresh calls this week for lawmakers to finish the job this year. Paul Bleiberg, vice president of government relations for the National Milk Producers Federation, said the tone from all the key players and everything else he's hearing is that "they're pretty intent on getting it done by the end of the year. ... I don't think anyone wants it to linger in the coming year."

The prevailing attitude on Capitol Hill and among farm groups, Bleiberg said, is: "You've gotten this far. Who wants to hit the reset button now?"