She modeled the impact climate change will have on food production. 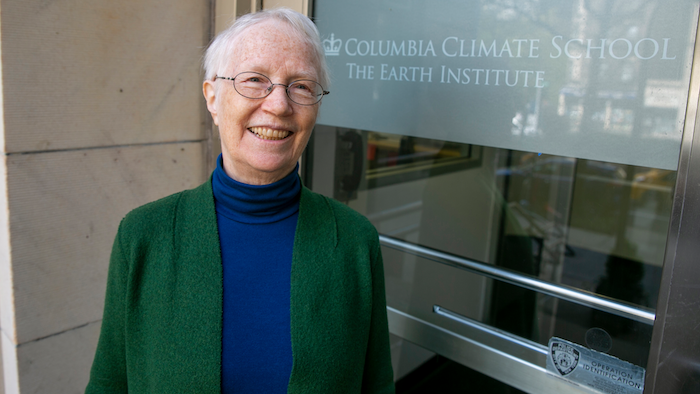 Cynthia Rosenzweig, 2022 World Food Prize recipient, meets with the media at the Columbia University Climate School in New York City on Tuesday, May 3, 2022. Rosenzweig is a senior research scientist and head of the Climate Impacts Group at the NASA Goddard Space Flight Center, the Goddard Institute for Space Studies and the Columbia University Climate School. She won the prize because of her work modeling the impact of climate change on food production.
AP Photo/Ted Shaffrey

DES MOINES, Iowa (AP) — A NASA climate research scientist who has spent much of her career explaining how global food production must adapt to a changing climate was awarded the World Food Prize on Thursday.

Cynthia Rosenzweig, an agronomist and climatologist, was awarded the $250,000 prize in recognition of her innovative modeling of the impact of climate change on food production. She is a senior research scientist at the NASA Goddard Institute for Space Studies and serves as adjunct senior research scientist at the Columbia Climate School at Columbia University, both based in New York.

Rosenzweig, whose win was announced during a ceremony at the State Department in Washington, said she hopes it will focus attention on the need to improve food and agricultural systems to lessen the effects of climate change.

“We basically cannot solve climate change unless we address the issues of the greenhouse gas emissions from the food system, and we cannot provide food security for all unless we work really hard to develop resilient systems,” she told The Associated Press during an interview ahead of the ceremony.

Jose Fernandez, the undersecretary of state for economic growth, energy and the environment, said more than 160 million people worldwide experienced food insecurity last year, a 19% increase over the year before, and one of the root causes is a decline in food production due to global warming.

“Climate change has already had a significant and negative impact on global agricultural production and its impact is only going to get worse. We’re seeing rice fields drown in floods. We’re seeing other crops wither in drought. We’re seeing shellfish die in more acidic oceans and crop diseases are spreading to new regions. We likely would not understand all these problems as well as we do today without the work of Dr. Cynthia Rosenzweig, this year’s World Food Prize laureate,” he said.

The Des Moines-based World Food Prize Foundation award recognized Rosenzweig as the founder of the Agricultural Model Intercomparison and Improvement Project. The organization draws scientists from around the world and from many disciplines to advance methods for improving predictions of the future performance of agricultural and food systems as the global climate changes.

The foundation credited her work with directly helping decision-makers in more than 90 countries establish plans to prepare for climate change.

In her work, Rosenzweig has studied how farmers can deal with climate change and how agriculture worsens the problem. For example, she contributed to a research paper published last month that said global agri-food systems create nearly one-third of the total global greenhouse gases emitted by human activity.

Rosenzweig said the world needs to reduce such emissions and adapt to the changing climate. She noted that greenhouse gases come from many parts of food production, including the release of carbon and carbon dioxide through the clearing of forests for farmland and the oxidization of carbon through the plowing of fields. The use of fertilizer also releases atmospheric nitrous oxide, farm equipment emits fossil fuels and cattle release methane.

Rosenzweig, who describes herself as a climate impact scientist, grew up in Scarsdale, New York, a suburban area that she said led her to seek out life in the country. She moved to Tuscany, Italy, with her husband-to-be in her 20s and developed a passion for agriculture. Upon returning to the United States, she focused her education on agronomy.

She worked as a graduate student at the Goddard Institute for Space Studies in the early 1980s, when global climate models were beginning to show the effects of human generated carbon dioxide on the global climate. As the only team member studying agronomy, she researched the impact on food production and has been working since then to answer those questions, she said.

The research organization she founded, AgMIP, develops adaptation packages, which could include the use of more drought-tolerant seeds and improved water management practices. In Bangladesh the group is working with rice farmers to develop new practices for managing rice paddies to reduce the significant release of methane produced by the existing process.

She said even the largest agribusiness corporations have shown a willingness to listen. She said some models colleagues have developed show how businesses could be effected by climate change and how they too have a role to play in reversing impact on climate.

“It’s really a global partnership of all the global food system to come together to restrain climate change and maintain the food security for the planet,” she said.

Nobel Prize laureate Norman Borlaug created the World Food Prize in 1986 to recognize scientists and others who have improved the quality and availability of food. Rosenzweig will receive the award and make a speech during an October ceremony in Des Moines.

Consolidation in the U.S. formula market has made it highly vulnerable to disruption.
May 20th, 2022
Follow Us
Most Recent