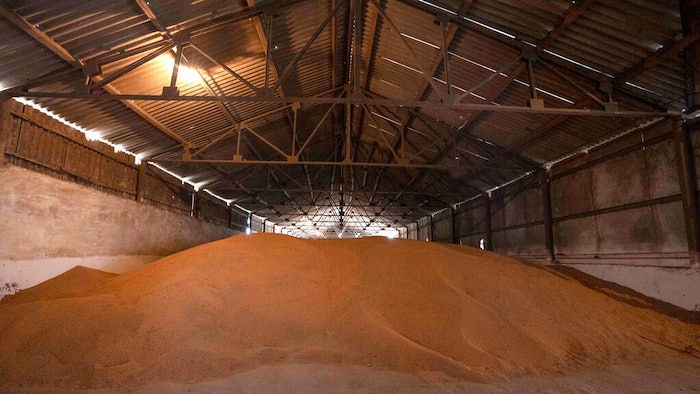 A wheat warehouse belonging to Ivan Kilgan, head of the regional agricultural association village, in Luky village, in western Ukraine, on March 25, 2022. The northwestern Lviv region near the border with Poland, far from the heart of what is known as Ukraine's breadbasket in the south, is being asked to plant all the available fields it can, said Kilgan. How to prevent food insecurity and skyrocketing prices globally as Russia continues its war in Ukraine will be the marquee topic of discussion at the IMF and World Bank Spring Meetings in Washington.
AP Photo, Nariman El-Mofty, File

WASHINGTON (AP) — Treasury Secretary Janet Yellen urged world finance leaders Tuesday to “get concrete” as they look for ways to combat a looming crisis over food insecurity around the globe that Russia's war in Ukraine has made even worse.

“This threat touches the most vulnerable people the hardest — families that are already spending disproportionate amounts of their income on food,” Yellen told fellow finance leaders during a food security meeting convened with members of the International Monetary Fund and the World Bank. “Moreover, the interconnectedness of the global food system means that people on every continent are impacted.”

On Tuesday afternoon, the Treasury Department issued a carve-out to the sanctions that have already been imposed to allow agricultural transactions and trade related to humanitarian aid and access to communications.

Russia and Ukraine produce a third of the world's wheat supply and the loss of commodities due to the war has resulted in soaring food prices and uncertainty about the future of food security globally, especially in impoverished countries.

The costs of fertilizer and natural gas have exploded and leaders expressed concern that countries could turn inward and restrict trade to protect their populations, indirectly hurting more vulnerable countries that face even worse food problems.

“We know that we must avoid export restrictions that could further increase prices,” Yellen said. “We must quickly support the most vulnerable populations with social safety nets and targeted support for smallholder farmers so they can continue to produce.”

David Malpass, president of the World Bank, said his organization will provide $17 billion per year to strengthen food security. “We think food insecurity is rising fastest in middle-income countries and responding appropriately is mission critical,” he said. The organization is also developing a 15-month crisis response package of $170 billion, that will address the pandemic, refugee resettlement and other issues alongside food supply.

The U.N.'s Food and Agriculture Organization Food Price Index has made its biggest jump since its inception in 1990, reflecting an all-time high in the cost of vegetable oils, cereals and meat, according to the organization.

A late March report from the organization stated that the global number of undernourished people could increase by 8 million to 13 million people into 2023, “with the most pronounced increases taking place in Asia-Pacific, followed by sub-Saharan Africa, and the Near East and North Africa. If the war lasts, impacts will go well beyond 2022/23."

Gilbert Houngbo, president of the International Fund for Agricultural Development, said international banks should look not just at food production but also “providing food on the table, it's a matter of ensuring minimum social protection for the most vulnerable communities."

“Those small-scale producers should have their fair share in what they produce,” he said.

"They can help mitigate the global fertilizer shortage and smooth supply chain disruptions for food and critical supplies,” she said, adding that they also can offer “targeted assistance and strengthen social safety nets to protect vulnerable people in the short term and build their resilience over the longer term.”

Anna Nagurney, a crisis management specialist at the University of Massachusetts Amherst, said Tuesday's meeting of global leaders was significant and “speaks to the growing fear and the increasing understanding that the world may be on the verge of a hunger catastrophe.”

Nagurney predicted that countries that have not yet provided clear support for Ukraine — such as China and India — will come to realize that the food insecurity from a prolonged war in Ukraine will affect their own national stability and the welfare of their citizens.

“This may help to further isolate Russia both morally and economically,” she said.

“One of the things we have to do is take practical steps to demonstrate that this system is helping the people who need it the most," he said, which includes a “focus on those countries that are struggling to pay for things like bread for their people in light of the increase in commodities prices.”