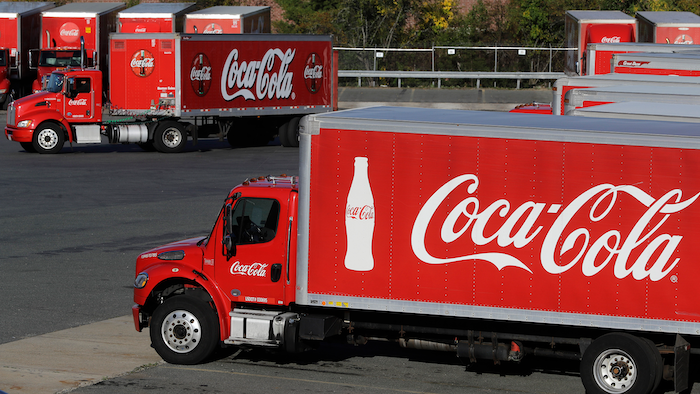 In this Monday, Oct. 14 photo, a truck with the Coca-Cola logo, behind left, maneuvers in a parking lot at a bottling plant in Needham, MA.
AP Photo/Steven Senne

Revenue jumped 8% to $9.51 billion, edging out Wall Street expectations for $9.48 billion, according to a survey by Zacks Investment Research.

The company announced that Coca-Cola Energy and Coca-Cola Energy Cherry - a flavor exclusive to the U.S. - and their zero-calorie counterparts will be available in 12-oz. cans nationwide starting in January 2020. Coke said that the launch is part of its ongoing effort to keep pace with the changing and diversifying tastes of consumers.

Coke on Friday reported net income of $2.59 billion, or 60 cents per share. Earnings, adjusted for one-time gains and costs, were 56 cents per share, which is in line with projections from industry analysts.

Shares of Coca-Cola Co. rose 1.5% before the opening bell.