Some spice processors use an industrial chemical compound to give turmeric its bright yellow color. 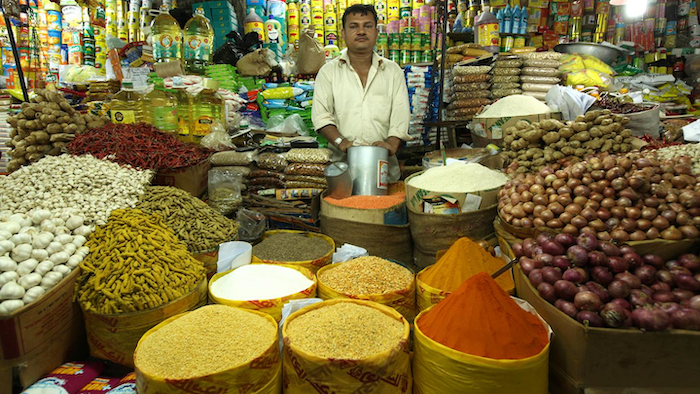 A merchant displays powdered and whole spices, including turmeric in the Karwan Bazar of Dhaka, Bangladesh.
Abir Abdullah/Asian Development Bank

It's billed as a health booster and healing agent, but it may be the source of cognitive defects and other severe ailments. A new Stanford-led study reveals that turmeric - a commonly used spice throughout South Asia - is sometimes adulterated with a lead-laced chemical compound in Bangladesh, one of the world's predominant turmeric-growing regions.

Long banned from food products, lead is a potent neurotoxin considered unsafe in any quantity. A related analysis published recently confirms for the first time that turmeric is likely the primary contributor to elevated blood lead levels among Bangladeshis surveyed.

"People are unknowingly consuming something that could cause major health issues," said the papers' lead author Jenna Forsyth, a postdoctoral scholar at the Stanford Woods Institute for the Environment. "We know adulterated turmeric is a source of lead exposure, and we have to do something about it."

The first study, available online in Environmental Research, involves a range of analyses, including interviews with farmers and spice processors in several Bangladesh's districts, which together produce nearly half of the nation's turmeric. Many traced the issue to the 1980s when a massive flood left turmeric crops wet and relatively dull in color.

Demand for bright yellow curry led turmeric processors to add lead chromate - an industrial yellow pigment commonly used to color toys and furniture - to their product. The practice continued as a cheap, fast way to produce a desirable color.

As a potent neurotoxin, lead increases the risk of heart and brain disease in adults and interferes with children's brain development. About 90 percent of children with elevated blood lead levels live in lower-income countries, and resulting cognitive damages are associated with nearly one trillion dollars in lost productivity annually.

"Unlike other metals, there is no safe consumption limit for lead, it's a neurotoxin in its totality," said the papers' senior author Stephen Luby, professor of medicine and the director of research for Stanford's Center for Innovation in Global Health. "We cannot console ourselves proposing that if the contamination were down to such and such level, it would have been safe."

The related study, published Sept. 17 in Environmental Science & Technology, looked at various potential sources of blood lead level contamination in Bangladeshis. Lead comes in various forms, called isotopes, and the ratios of those isotopes vary by the lead's origin. The researchers were able to fingerprint lead chromate-adulterated turmeric as the most likely culprit by matching it to lead isotopes in people's blood. The research is the first to directly link lead in turmeric to lead levels in blood.

The researchers did not find direct evidence of contaminated turmeric beyond Bangladesh, and they point out that food safety checks by importing countries have incentivized large-scale Bangladesh spice processors to limit the amount of lead added to turmeric destined for export. However, the researchers caution, "the current system of periodic food safety checks may catch only a fraction of the adulterated turmeric being traded worldwide." In fact, since 2011, more than 15 brands of turmeric - distributed to countries including the U.S. - have been recalled due to excessive levels of lead.

While these recalls and previous studies found the presence of lead in turmeric, none clearly identified the source (some suggested it might be linked to soil contamination), proved the link to blood lead levels or revealed the problem's pervasiveness and incentives perpetuating it.

Since 2014, Forsyth, Luby and Scott Fendorf, the Terry Huffington Professor in Stanford's School of Earth, Energy and Environment - co-authors on both papers - have worked in rural Bangladesh to assess lead exposure. With funding from the Stanford Woods Institute for the Environment, they first conducted a population assessment that found more than 30 percent of pregnant women had elevated blood lead levels.

The researchers now plan to focus on shifting consumer behaviors away from eating contaminated turmeric and reducing incentives for the practice. They suggest more effective and efficient drying technologies for turmeric processing. They also recommend that import inspectors around the world screen turmeric with X-ray devices that can detect lead and other chemicals.

Although few low-cost answers seem readily available in Bangladesh, the researchers suggest engaging consumers, producers and other stakeholders focused on food safety and public health could provide the seeds of a solution. To that end, Forsyth, Luby and Fendorf are part of an interdisciplinary project team, funded by the Stanford King Center on Global Development, seeking solutions to reduce lead exposure from turmeric, battery recycling and other sources in Bangladesh and beyond.

Among other goals, the team plans to develop business opportunities that reduce lead exposure. One team member, bioengineer Manu Prakash, is developing low-cost technologies to measure lead in turmeric, blood and other sources. Other collaborators, Shilajeet Banerjee and Erica Plambeck, are studying ways to shift demand and create business opportunities for lead-free turmeric.