More workers were arrested at Koch than at any other plant during last week's raid that produced about 680 arrests across seven facilities. 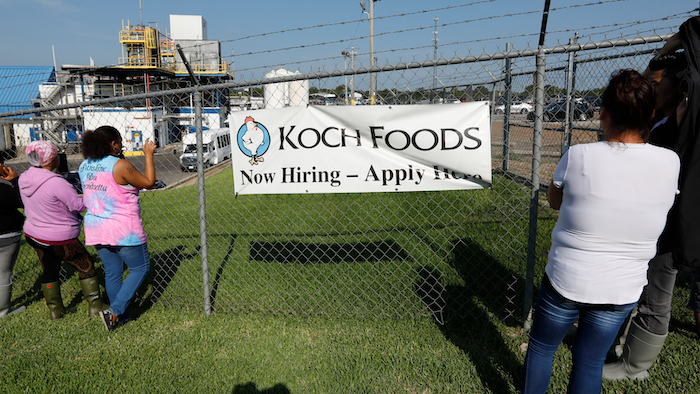 JACKSON, Miss. (AP) — One of the Mississippi chicken processing plants caught in an immigration raid plans a job fair Monday. Illinois-based Koch (cook) Foods says it will be recruiting new workers for its Morton plant at a state job center in nearby Forest.

Federal officials allege Koch was one of four companies "willfully and unlawfully" employing people who lack authorization to work in the U.S. Koch, based near Chicago, said Thursday that it relies on the E-Verify program to check new hires for immigration status. Koch says it's cooperating with the investigation and is "diligent" in complying with employment laws.

Three Democratic congressmen are demanding that the Department of Homeland Security and the Department of Justice produce documents related to immigration raids at seven Mississippi chicken processing plants. They want Attorney General Bill Barr and Acting Homeland Security Secretary Kevin McAleenan to detail the cost of raids. They also want to know whether any U.S. citizens were detained, how many parents were separated from children, and whether any still remain separated.

Federal officials say evidence from electronic monitoring bracelets shows that people who already had been arrested for immigration violations and weren't allowed to work in the United States were working at all seven chicken processing plants that were raided Wednesday in Mississippi. Documents unsealed Thursday in federal court also suggest allege six of seven the plants were "willfully and unlawfully" employing people who lacked authorization to work in the United States.

The sworn statements supported the search warrants that led a judge to authorize Wednesday's raids, and aren't court charges. They allege that managers at two processing plants owned by the same Chinese man appeared to be actively participating in fraud. They also show that supervisors at other plants at least turned a blind eye to evidence strongly suggesting job applicants were using fraudulent documents and stolen or made-up Social Security numbers.