The march to a McDonald's restaurant in North Carolina was seen as a way to draw attention to raising the minimum wage and securing other protections. 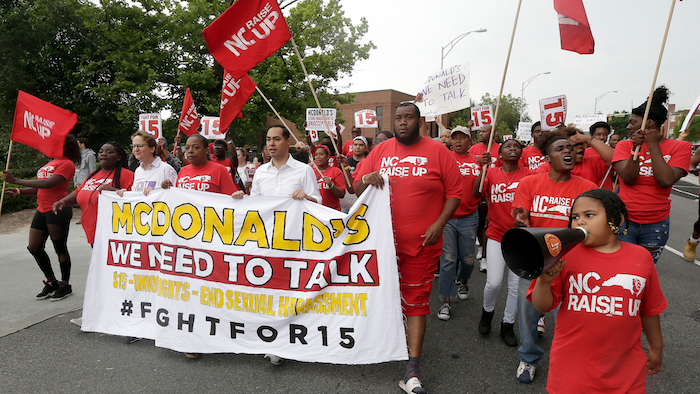 DURHAM, N.C. (AP) — Democratic presidential contender Julian Castro joined a march to a McDonald's restaurant in North Carolina on Thursday to draw attention to workers' efforts to raise minimum wage and secure other protections. Nearly all the 2020 Democratic presidential candidates have expressed support for the idea that the federal minimum wage should be more than doubled, to $15 an hour, and several were joining actions around the country Thursday.

Castro, the former secretary of Housing and Urban Development and current San Antonio mayor, marched with roughly 200 activists, minimum wage workers and union representatives from a park in Durham to a nearby McDonalds. He joined them in chants of, "Put some respect in my check," and "What do we want? 15! When do we want it? Now!"

Workers banged on makeshift drums, waved red flags saying "NC raise up" and carried a giant effigy of McDonald's cartoon character Ronald McDonald. The march ended in a rally front of a McDonalds. "What's happened in this country over the last 40 years is we've expected less and less from people and from corporations at the very top, and we've expected more and more from the middle class and the working poor," Castro said during the rally.

He added that his campaign workers won't patronize McDonalds until worker's demands for higher wages, a union and sexual harassment protections are met. His speech drew applause from the crowd and cheers of "you've got my vote!"

McDonalds has come under fire from workers in recent years over their treatment and wages. Durham resident Jamese Cook, 19, has been working at a McDonalds in Durham for five months so far and said she's struggling to help her mother, whom she lives with, pay the bills. "I had to get more hours to help her," Cook said.

But Cook expressed skepticism over politicians' commitment to the Fight for 15 cause, including Castro. She said she wants to see more legislative action. "I don't really see anyone fighting for minimum wage like the people I see here," she said. "This is just a start."

Durham resident Devin Evans, 18, said he was sexually harassed while working at another fast-food restaurant by his boss, but couldn't immediately quit because he needed the money. He spoke with Castro before the march about his experience and expressed gratitude for Castro's presence.

"I want to see more active candidates that actually care," he said. "Seeing someone with that power here trying to join hands with us... it touches me."

Six groups say the labels falsely imply the turkey brands have benefits for workers, animals and the environment.
Nov 24th, 2020

McCormick, which already owns Frank's RedHot, is getting even spicier.
Nov 24th, 2020

One company was also hit for employing a 15-year-old minor in meat processing.
Nov 23rd, 2020

How the Pandemic Has Impacted Seafood Trade & Consumption

It hasn't all been doom and gloom for the industry, as seafood delivery and home cooking have helped businesses weather the pandemic.
Nov 23rd, 2020

Two products distributed in 15 states have been recalled after an isolated positive test result for E. Coli.
Nov 23rd, 2020

Fish Farm Pays $31K in Back Wages Over H-2A Violations

The farm failed to reimburse H-2A workers for expenses incurred while traveling to their employer's location from their home countries.
Nov 23rd, 2020

Alleging food safety issues, the protests decried ending Taiwan's long-standing ban on US pork and beef imports that due to be lifted in January.
Nov 23rd, 2020

Trump's trade war with China led to a rocky few years for the industry, which is based mostly in Maine.
Nov 23rd, 2020

It is one of many shocking claims alleged in the lawsuit.
Nov 20th, 2020
Follow Us
Most Recent