This overturned a ruling by a lower panel last year that said Seoul was unfairly discriminating against Japanese products. 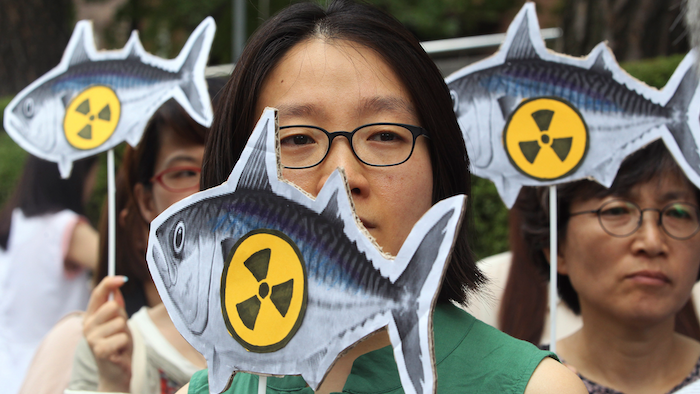 SEOUL, South Korea (AP) — The World Trade Organization has upheld South Korea's import ban on Japanese seafood from areas affected by the 2011 nuclear disaster in Fukushima, overturning a ruling by a lower panel last year that said Seoul was unfairly discriminating against Japanese products. The decision is a setback for Japan, which has promoted Fukushima's recovery from the nuclear disaster and the safety of its agricultural and fisheries products ahead of next year's Summer Olympics in Tokyo.

South Korea on Friday welcomed the decision and said it will continue to block all fishery products from Fukushima and seven neighboring prefectures to ensure "only foods that are confirmed as safe are put on the table."

Yoon said the WTO ruling allows Seoul to maintain the ban "indefinitely" until it views the safety concerns as fully resolved. When asked about the possibility of the seafood ban fueling larger trade and diplomatic disputes, he said that "hopefully, that won't happen."

South Korea broadened initial import restrictions to a blanket ban covering all seafood products from the eight prefectures in 2013, after the Tokyo Electric Power Company revealed that highly contaminated water leaked from a storage tank at a crippled nuclear plant in Fukushima that was submerged by a massive tsunami in 2011.

Japan launched a complaint with the WTO over the ban in 2015, saying that the radioactive levels of seafood from the areas were safe. The ruling by WTO's appellate body reversed key points of a verdict by a lower dispute panel last year that supported Japanese claims that the South Korean measures excessively restricted trade and were "arbitrarily or unjustifiably discriminating" against Japanese food products.

The appellate body said the panel failed to consider whether the methods of contamination testing proposed by Japan would fully satisfy South Korean protection standards.

The Fukushima plant has now been significantly stabilized and radiation has come down to levels considered safe in most areas. Still, more than 20 countries and areas keep their import ban or restrictions on Japanese fisheries and agricultural products, although the number had come down from 54 soon after the disaster. The government of Prime Minister Shinzo Abe has pushed agricultural exports as a main part of its economic growth strategy.

South Korea's imports of Japanese seafood have declined significantly since the 2013 ban. South Korea imported about 20,000 tons to 30,000 tons of pollack and mackerel from Japan in 2010, but the volume dropped below 3,000 tons in 2018 with the country continuing to buy more fish from alternative sources like Russia and Norway, Yoon said.

"Easing and lifting of import restrictions related to the Fukushima Dai-ichi nuclear power plant accident is an extremely important issue," said Yoshihide Suga, Japan's chief Cabinet secretary. He added that all Japanese agricultural and fishery exports are tested safe under Japan's own standards that are set stricter than international ones.

"We will patiently continue our effort to negotiate with South Korea and other countries to achieve easing or lifting of their import restrictions based on science," Suga said.