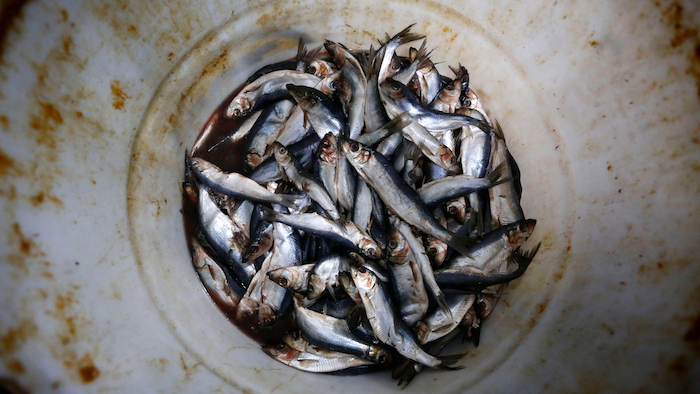 In this March 18, 2019 photo, herring cover the bottom of a barrel at a bait dealer in Portland, Maine. Members of the lobster business fear a looming bait crisis could disrupt the industry during a time when lobsters are as plentiful and valuable as ever. The fishery relies on herring, a small, schooling fish that other fishermen seek in the Atlantic Ocean.
AP Photo/Robert F. Bukaty

PORTLAND, Maine (AP) — The boom times for the U.S. lobster industry are imperiled this year because of a shortage of a little fish that has been luring the crustaceans into traps for hundreds of years.

Members of the lobster business fear a looming bait crisis could disrupt the industry during a time when lobsters are as plentiful, valuable and in demand as ever. America's lobster catch has climbed this decade, especially in Maine, but the fishery is dependent on herring — a schooling fish other fishermen seek in the Atlantic Ocean.

Federal regulators are imposing a steep cut in the herring fishery this year, and some areas of the East Coast are already restricted to fishing, months before the lobster season gets rolling. East Coast herring fishermen brought more than 200 million pounds of the fish to docks as recently as 2014, but this year's catch will be limited to less than a fifth of that total.

The cut is leaving lobstermen, who have baited traps with herring for generations in Maine, scrambling for new bait sources and concerned about their ability to get lobster to customers who have come to expect easy availability in recent years.

The cut in the herring quota stems from a scientific assessment of the fish's population last year by the National Oceanic and Atmospheric Administration's Northeast Fisheries Science Center. The assessment found a below-average number of young herring are surviving in the ocean.

The loss of herring has sounded alarms among scientists and conservationists, because the fish also serve a critical role in the ocean food chain and they're valuable as food for humans.

It's unclear exactly what factors are causing young herring to fail to survive to maturity, said Jonathan Deroba, lead assessment scientist for herring with the Northeast Fisheries Science Center. He said it's "premature to predict the sky is falling," though he added the herring population could be suffering from multiple stresses at once.

"We'd be foolish not to look at climate change. The abundance of haddock, which are egg predators. And fishing activity on Georges Bank disrupting herring," Deroba said. Georges Bank is a key fishing area off New England.

Fishermen bring herring to shore mostly in Maine and Massachusetts, which are also the biggest lobster fishing states. Lobstermen also load traps with other kinds of bait, such as menhaden, and some herring is available in freezers, but fishermen said they're concerned there won't be enough to go around.

The New England Fishery Management Council is also considering herring catch quota for 2020 and 2021 later this year, and fishermen said they're concerned the cuts could be maintained for those years. The loss of herring is also a heavy blow to the fishermen who harvest the species, said Jeff Kaelin, who works in government relations for Lund's Fisheries, a herring harvester based in Cape May, New Jersey.

"It's going to be tough on everyone," Kaelin said, not just the people who catch the herring, but also "the lobstermen who depend on it for historic bait supply."

The U.S. lobster fishery set an all-time record for value at docks in 2016, when the catch was worth more than $670 million. That was also the year the herring catch fell to its lowest point since 2002, though it was still more than 138 million pounds.

Lobsterman Jeffrey Peterson, who fishes out of the island town of Vinalhaven, Maine, said he's sure he'll be able to load his traps with bait this summer. He's just concerned about how expensive it'll be to do so.

She modeled the impact climate change will have on food production.
May 5th, 2022
Follow Us
Most Recent