With backyard barbecue season just around the corner, Beyond Meat is increasing distribution of its plant-based sausage. 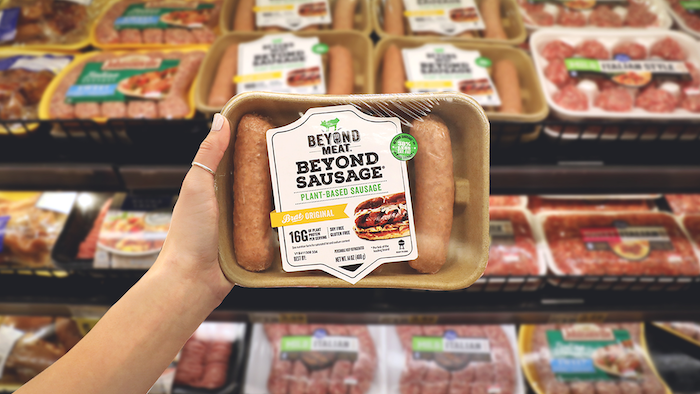 Beyond Sausage has expanded distribution to retailers nationwide.
Business Wire

Beyond Sausage is the world's first plant-based sausage that looks, sizzles, and satisfies like pork, but comes with the benefits of plant-based meat.

The links have more protein than pork sausage but 38 percent less saturated fat and no nitrates, gluten, soy or GMOs.

Beyond Sausage can now be found in more than 4,000 grocery stores, restaurants and sports stadiums nationwide.

Named one of TIME’s Best Inventions of 2018, Beyond Sausage is also available in a growing number of restaurants and food service outlets including DogHaus, Bareburger, Yankee Stadium, Schaller’s Stube, Rip’s Malt Shop, Wurstküche, Rosamunde Sausage Grill, Next Level Burger, The Moonlighter, State Street Brats and Lord of the Fries.

Consumers looking to cook up Beyond Sausage at home can find it in the meat section at the following grocery outlets:

Beyond Fried Chicken Rolling Out to KFC Stores Jan. 10

Beyond Meat Planning R&D Center in Shanghai; 1st Outside of US