The inability to communicate is the downfall of many projects, careers, and companies.

The number one problem I see today in business is poor internal communication. The ability to communicate separates humans from the remainder of the animal kingdom, and yet poor communication is the downfall of many projects, careers, and companies.

Internal communications are the core problem in many cases for the simple fact that if internal messaging is corrupted, then what is sent to the customers can't be any better.

Communication is Done by the Receiver

In the early 1970s, it was posited that the receiver or recipient is the individual who does the communicating–not the conveyor of the information. Working with various groups in a variety of industries, I can attest to this.

Learning style also matters a great deal. Some people learn and retain best by reading, while other excel by listening. I covered this in my book The Product Rocket: Launching New Products to Out-of-This-World Success and recommend that all internal and external marketing material be published in multiple formats.

Print can be converted to a slide show and then read and recorded for listening (ala a podcast). Similarly, the audio track of a video can be distributed separately. Tailor communications to the various styles of your constituents.

If a business is composed of a set of individuals with a common goal, then the culture of the group is how these goals are created and accomplished.

As long as the business results remain positive, major changes in culture may be counterproductive. However, if negative results are the norm, then the culture should be thoroughly examined to determine how it contributed to the demise. Difficulties arise when the culture needs significant improvement to improve business outcomes.

Changing the culture, or as I prefer to call it “the how of the what” requires changing belief systems and mindsets. Not a simple task and not for the faint of heart. It is also not terribly practical to attempt to do this en masse.

Instead, start small. Talk to one or just a few of your direct reports, or the core group of your project teams. Discuss where you want the group or the firm to be in three, six, and twelve months. Share your observations of what is hindering progress and ask for input and then offer suggestions.

If you can make policy changes then do so if you are confident they will not backfire. Unless bankruptcy or a hostile takeover are imminent, slow and steady communication (there is that word again) is the path to success.

Clarity, Not Volume, is King

Clarity in your communications is the path to success. Increasing the volume, both audible and quantity, of a poor or misleading message is worse than doing nothing. Some say that insanity can be defined by repeating something while expecting new results. If this is true, then repeating poor messages and expecting a positive change is insane.

The key is in the clarity of the message. Keep the message simple and concise, and repeat it frequently. To get the full effect of positive change, and get it quickly, identify avatars within the organization who can exemplify the new messages. These avatars can (and should) be from all levels of the company. Their role is to talk, display, and live the new message. Only then will the rank and file employees believe the new is not just a fad.

Sending e-mails, paying lip service to the message, and worst of all, hanging insipid “inspirational” posters may create change, but probably not the change you seek.

Oddly enough, the same trait that elevates humans above the rest of the animal kingdom also raises great companies above the good ones. Good communication, both internal and external, is the most important skill leaders possess. Without it, projects and profit go awry. With it, profits soar and so does the organization.

Doug Ringer, the author of “The Profit Imperative” and “The Product Rocket,” works with leaders who want to think strategically, grow dramatically, compete successfully, and develop profitable habits within their organizations. He can be reached at 502-509-9746 and doug@dougringer.com. Follow his work at www.dougringer.com and on Twitter @doug_ringer. 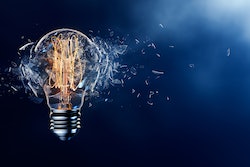 Problem Solving is Not Innovation