The four-door EV showcases the company's advanced display tech, as well as some new applications unique to automotive.

By now I think we can all agree that the role of entertainment and communication technology will continue to play a greater role in all facets of society, including automotive offerings. But, just in case you weren’t sure, electronics giant Sony made it very clear … by building their own car.

On display this week at the Consumer Electronics Show is Sony’s Vision S, an electric (of course) concept car built to showcase how their products can make the future of mobility that much safer and more enjoyable.

According to Digital Trends, the four-door Vision seems to borrow style points from both the Tesla Model 3 and Porsche. In addition to the full-length dash screen that simultaneously provides an instrument panel and entertainment menu, the Vision also features a screen on each headrest for backseat passengers, and a 360-degree panoramic sound system.

More than 30 sensors are embedded throughout the vehicle, as well as radar, LIDAR and other safety and navigation-based cameras. While some of this tech is new for Sony, the company has been providing its CMOS sensors to Toyota for a while. In addition to the imaging and sensing technologies, on-board software regulates a collection of AI, telecommunication and cloud platforms that provide a steady stream of data relative to vehicle performance and rider preferences.

The electric vehicle runs on a chassis and drivetrain built by Magna, who also works with GM, Ford, Mercedes, and Tesla. Additionally, suppliers such as Qualcomm, Continental and Nvidia played pivotal roles.

No prices were revealed, because more than a concept car, the Vision S is, in all ways and shapes, a sales vehicle. Sony is apparently happy being an automotive supplier, not a competitor. 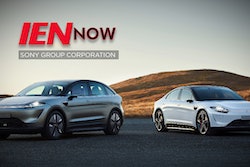 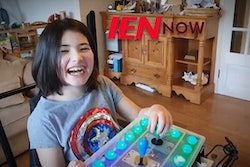 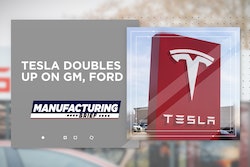 Tesla Doubles Up on GM, Ford