Pininfarina has created some of the most amazing vehicles all all time, and their new super EV could add to that list.

Pininfarina is one of those companies that has seen it all – primarily because as one of the most well-known designers of super cars, they’ve been responsible for some of the most amazing automotive creations of all time.

And although the company has worked with a who’s who of European automotive royalty, including Ferrari, Alfa Romeo and Maserati, the company has never put its own name on a car. Until now.

In 2019 the 88-year-old company will unveil the Pininfarina Battista, which the company is describing as the fastest and most powerful vehicle to ever come out of Italy. The all-electric supercar promises 1,900-horsepower and a top speed of 250 mph.

Borrowing the Battista name from the company’s founder, the company, which has been owned by Mahindra since 2015, will produce up to 1,696 foot-pounds of torque in going 0-60 in under two seconds.

And while the battery probably won’t last as long when traveling in the triple digits, Pininfarina is promising a range of 300 miles between charges. While the Italian company has handled all the design and assembly tasks, it did rely on a powertrain from Rimac Automobil, a Croatian firm with ties to Porsche.

The Battista will enter production in 2020, but in a limited fashion that will supply only 50 cars to be sold in each of the U.S., European, and Middle East/Asian markets. It’s rumored that Mahindra has invested upwards of $100 million to jumpstart this production division of Pininfarina.

Although the company now shares a common experience with their customers by making their own vehicle, they’re still not quite competitors. The Paninfarina Battista will retail for between $2 and $2.5 million. 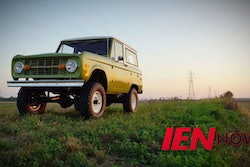