The deal is for an estimated 466 trailers.

IEN Staff
The trailers are designed to be pulled by the Oshkosh Heavy Equipment Transporter A1 currently in service with the U.S. Army.
Oshkosh Defense

The five-year requirements contract is for an estimated 466 trailers and associated logistics products and support services. Under the first delivery order, valued at $37.6 Million, Oshkosh will produce five test trailers for product verification testing, operational testing, logistics development and engineering development, along with 68 production trailers.

Oshkosh Defense designed the EHETS trailer to be pulled by the Oshkosh Heavy Equipment Transporter (HET) A1 currently in service with the U.S. Army. The combined HET A1 and EHETS trailer system is designed to self-load and unload and can haul a payload of up to 90 tons, allowing it to transport the heaviest Army tracked vehicles, including current and future versions of main battle tanks, while also obtaining European road permissions at required payloads. 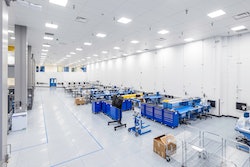