The European Chips Act will link research, design and testing. 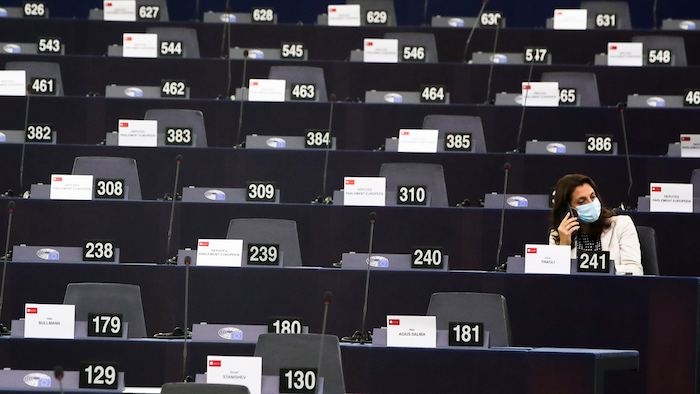 An MEP waits in the plenary for the session to begin at the European Parliament in Strasbourg, France, Sept. 15, 2021.
Yves Herman, Pool via AP

European Commission President Ursula von der Leyen unveiled the European Chips Act on Wednesday to provide official support for the bloc's “chip ecosystem” so that the continent can stand on its own when it comes to producing the vital technology.

Semiconductors are the tiny microchips that act as the brains for everything from smartphones to cars, and an extended shortage has highlighted the importance of chipmakers, most of which are based in Asia, to global supply chains. Automakers have been among the hardest hit by the shortage, which has slowed or halted production.

“While global demand has exploded (for chips), Europe’s share across the entire value chain, from design to manufacturing capacity has shrunk," von der Leyen said in a self styled State of the European Union address to the bloc's parliament in Strasbourg. “We depend on state-of-the-art chips manufactured in Asia."

“The aim is to jointly create a state-of-the-art European chip ecosystem, including production," which will ensure a secure supply of chips, she said. She didn't specify whether financial support would be given.

The U.S. has also been stepping up efforts to bolster the industry, and lawmakers approved a bill earlier this year with the goal of boosting domestic semiconductor production, part of a wider rivalry with China over trade and technology.

Von der Leyen said chipmaking is also important for Europe's “tech sovereignty" - the idea that the EU should be more self-sufficient and rely less on U.S. or Chinese tech.