Researchers are looking to leverage the relationship between button mushrooms and cyanobacteria.

Based on a report from the American Chemical Society, researchers from the Stevens Institute of Technology are producing mushrooms patterned with energy-producing bacteria and an electrode network. The mushrooms are looking to leverage the symbiotic relationship between button mushrooms and cyanobacteria.

In the researcher’s scenario, the mushroom provides shelter, moisture and nutrients, while bacteria 3D-printed on the mushroom's cap would supply energy by photosynthesis. Graphene nanoribbons printed alongside the bacteria could capture electrons released by the microbes during photosynthesis, producing bio-electricity.

At these sites, electrons could transfer through the outer membranes of the bacteria to the conductive network of graphene nanoribbons. Shining a light on the mushroom activated cyanobacterial photosynthesis, generating a current of about 65 nanoAmps. Although this current is insufficient to power an electronic device, the researchers say that an array of bionic mushrooms could generate enough current to light up an LED.

The researchers are now working on ways to generate higher currents using this system. They say that this 3D-printing approach could be used to organize other bacterial species in complex arrangements to perform useful functions, such as bioluminescence. 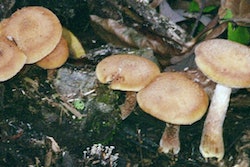