A volumetric display will allow viewers to see a 3D image from all angles without any 3D glasses or headsets. 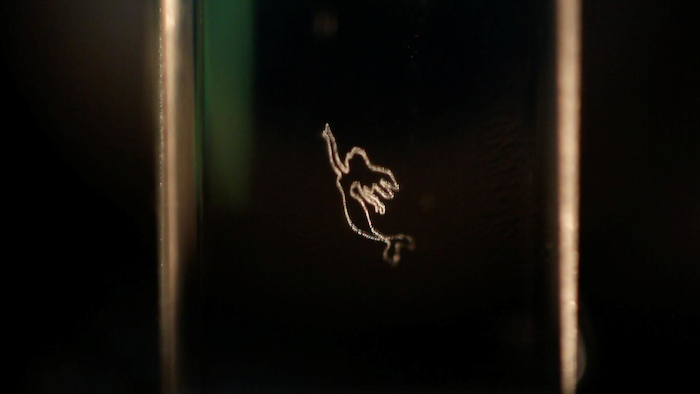 This mermaid graphic is created from laser-generated bubbles suspended in a liquid "screen" and illuminated with a halogen lamp.
Kota Kumagai, Utsunomiya University

Researchers have developed a completely new type of display that creates 3D images by using a laser to form tiny bubbles inside a liquid "screen."

Instead of rendering a 3D scene on a flat surface, the display itself is three-dimensional, a property known as volumetric. This allows viewers to see a 3D image in the columnar display from all angles without any 3D glasses or headsets.

"Creating a full-color updatable volumetric display is challenging because many three-dimensional pixels, or voxels, with different colors have to be formed to make volumetric graphics," said Kota Kumagai, first author of the paper. "In our display, the microbubble voxels are three-dimensionally generated in a liquid using focused femtosecond laser pulses. The bubble graphics can be colored by changing the color of the illumination light."

Although the new work is a proof of concept, the technology might one day allow full-color updatable volumetric displays. These types of displays could be used for art or museum exhibits, where viewers can walk all the way around the display. They are also being explored for helping doctors visualize a patient's anatomy prior to surgery or to let the military study terrain and buildings prior to a mission.

"The volumetric bubble display is most suited for public facilities such as a museum or an aquarium because, currently, the system setup is big and expensive," said Kumagai. "However, in the future, we hope to improve the size and cost of the laser source and optical devices to create a smaller system that might be affordable for personal use."

The bubbles for the new display are created by a phenomenon known as multiphoton absorption, which occurs when multiple photons from a femtosecond laser are absorbed at the point where the light is focused. Multiphoton absorption allowed the researchers to create microbubbles at very precise locations by moving the focus of the laser light to various parts of a liquid-filled cuvette that acted as a "screen." Using a high-viscosity, or thick, liquid prevents the bubbles, once formed, from immediately rising to the top of the liquid.

The bubble graphics are viewable when they scatter light from an external light source such as a halogen lamp or high-power LED. The researchers produced monochromatic images in white, red, blue and green by switching the color of the illuminating LED. They say that illuminating the graphics with a projector could create different colors in different regions of the image.

Rather than creating each bubble one by one, the researchers used a computer-generated hologram to form 3D patterns of laser light that let them control the number and shapes of the microbubble voxels. This approach also increased the amount of light scattered from the microbubbles, making the images brighter.

In the paper, the researchers demonstrate their technique by creating a sequence of 2D bubble images of a mermaid, a 3D rendered bunny, and 2D dolphin graphics in four different colors. They also showed that microbubble formation depends on the irradiation energy of the laser and that the contrast could be modified by changing the number of laser pulses used to irradiate the liquid.

"Our bubble graphics have a wide viewing angle and can be refreshed and colored," said Kumagai. "Although our first volumetric graphics are on the scale of millimeters, we achieved the first step toward an updatable full-color volumetric display."

The researchers are now developing a system that would use a stream inside the liquid to burst the bubbles, allowing the image to be changed or cleared. They are also working on methods that could allow the formation of larger graphics, which requires overcoming spherical aberrations caused by the refractive index mismatch between the liquid screen, the glass holding the liquid, and air.

Riddell's Axiom Could Be Breakthrough Helmet for Football