Originally scheduled to debut in 2015, it has been delayed by manufacturing problems. It hopes to compete with the Airbus A320 and Boeing 737 in China's booming air travel market. 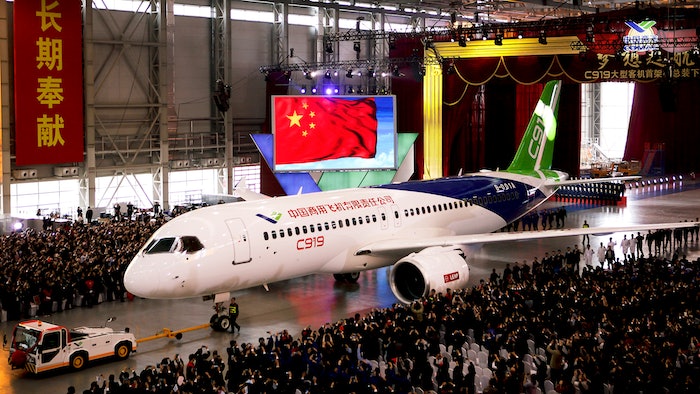 In this file photo, the first twin-engine 158-seat C919 passenger plane made by The Commercial Aircraft Corp. of China (COMAC) is pulled out of the company's hangar near the Pudong International Airport in Shanghai.
AP File Photo

BEIJING (AP) — After years of delays, China's first large, homemade passenger jetliner will take to the air for its maiden flight in the first half of this year, state media reported Monday.

The C919 was originally due to fly in 2015, but has been beset by delays blamed on manufacturing problems. It is now scheduled to enter service in 2019, aimed at competing with the Airbus A320 and Boeing 737, along with the Russian Irkut MC-21.

Airbus and Boeing say the market for new aircraft will be worth more than $5 trillion over the next 20 years. Industry experts say China faces a tough slog capturing a significant share of that market, even with government support. Comac has 517 orders for the C919.

The C919 is part of China's efforts to develop a homegrown aviation industry in one of the world's biggest and fastest-growing air travel markets. China currently relies heavily on foreign-made aircraft.

Last June, the ARJ21-700, China's first homemade regional jet, made its debut flight carrying 70 passengers. The jet is one of a series of initiatives launched by the party to transform China from the world's low-cost factory into a creator of profitable technology in aviation, clean energy and other fields.

The ARJ21, also made by Comac, is a rival to aircraft made by Bombardier Inc. of Canada and Brazil's Embraer SA.