Recently, PwC unveiled research that confirmed a number of 3D printing trends and identified a collection of manufacturing's persisting reservations.

Two years ago the global consulting and services firm PwC published results from its Disruptive Manufacturing Innovations Survey. The goal was to record a snapshot of how U.S. manufacturers were adopting 3D printing, how they were using it, and the role they felt it would play in the future.

Recently, PwC unveiled an update to this research. The survey confirmed a number of trends while also identifying a collection of persisting reservations about the technology.

The adoption of 3D printing—both desktop and industrial—continues to rise. According to IDC, global spending hit $11 billion in 2015 and is forecast to reach $27 billion by 2019. This growth has been aided by a list of build materials that continues to expand beyond plastics and resins to include metal and ceramics.

More reliable printing technology, expanded knowledge of how to incorporate it, and better materials also seem to be playing a role in the wider spread application of 3D printing. PwC’s results show that more manufacturers are currently implementing 3D printing in some way when compared to two years ago, (66 percent in 2014 vs. 71 percent in 2016), and a higher percentage (51 percent) are using it for prototyping and final products than two years ago (35 percent.).

In support of the belief that 3D printing quality is improving, 42 percent of respondents expect 3D printing to be used for high-volume production in the next three to five years. This is a four percent increase over two years ago. Most manufacturers (67 percent of 2016 respondents) believe that 3D printing will be used primarily for low-volume, specialized products. However, more than half (52 percent) believe 3D printing can be a viable solution for aftermarket parts production.

The production of aftermarket or replacement parts and products via a 3D printer would be a dynamic supply chain shift. When asked specifically about the areas where 3D printing could have a disruptive effect:

Two years ago the number-one concern was supply chain disruption. However, before this technology can have any type of effect on the supply chain, product development or customer relations, it needs to be purchased. The most commonly cited barriers to adopting 3D printing follow:

When examining these findings, it appears that more manufacturers are embracing the potential of 3D printing, but concerns over cost, the ability to handle more complicated builds, and process implementation persist. As more build materials are made available and the functional capabilities of the printers improve, it will be interesting to see how these responses change. 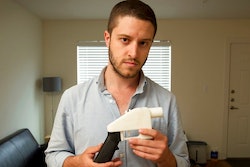